Hm - Can't think of any recommended reading off the top of my head - it's just stuff you pick up over 45 years of deeply hands-on playing with cars. It's my mum's fault - she always used to make me go and watch my dad when he was fixing the (t)rusty Triumph Mayflower. Which he had to do often.
But I know very little of competition suspension setup theory: and beware, because a lot of people who claim they do, don't.
Castor is related to kingpin inclination. It's best illustrated by the bicycle wheel analogy - follow the line of the forks down to the road, and drop a perpendicular down from the axle. The amount of castor dictates the self-centring ability of the wheel. 7° is a lot, but fine to live with. Which you will have to, as changing it would require surgery to the pick-up points. And anyway, it's original!
https//fbhvc.co.uk
https//thesahb.com
Top

I have a one paragraph explanation of Castor Action in a book that was given to my father by his father in 1937.

I will see if I can photocopy it and put it on the site.

Would you be able to put it on the Wiki David? That'd be grand. I love some of these old books - I'm trying to get round to reading 'Principles of Radio Servicing' from 1936!

Roger - did your Hawk have MG front suspension or the tubular one from Hoyle? I can't recall. (Or is that irrelevant to the castor adjustability?)
Top

amulheirn wrote:Would you be able to put it on the Wiki David? That'd be grand. I love some of these old books - I'm trying to get round to reading 'Principles of Radio Servicing' from 1936!

Roger - did your Hawk have MG front suspension or the tubular one from Hoyle? I can't recall. (Or is that irrelevant to the castor adjustability?)

Well, it had the Hawk tubular kit which I believe is the same as the Hoyle one. Coilovers, not lever arms. This is the setup my comments all refer to, I know nothing of MGBs except the upper steering column and the rack. Although an uncle had a Morris Oxford, which was pretty much the same car...
https//fbhvc.co.uk
https//thesahb.com
Top

Roger King wrote: Well, it had the Hawk tubular kit which I believe is the same as the Hoyle one. Coilovers, not lever arms. This is the setup my comments all refer to, I know nothing of MGBs except the upper steering column and the rack. Although an uncle had a Morris Oxford, which was pretty much the same car...

Ah yes - that's the one. Well I guess I'll be getting to know some trigonometry again then to check this. I just discovered Stu's document on this but he only says he has 'neutral' castor, so I guess he didn't measure it exactly: http://www.the289register.com/stuart/Un ... erhaul.pdf

The Triumph Mayflower eh? A car with quite a lot of straight bodywork lines: http://www.boldride.com/ride/1951/trium ... on/image/3
Top

That one looks unbelievably tarty! They were only sold in plain grey or black, no two-tones. KTM 142 was grey with red Rexine trim and sills full of chicken wire and concrete.
It's 12 years since I built my Hawk and memories of the castor etc. may not be entirely reliable, but I do remember investigating changing the castor angle as the steering always seemed fairly heavy. And I do remember that I couldn't improve the angle without surgery, which it didn't warrant.
https//fbhvc.co.uk
https//thesahb.com
Top

Thanks to Peter on the tech talk call a few weeks ago - he loaned me an MGB stub axle reamer.

After pushing two new bronze bushes into the stub axle, they become slightly too small for the king-pin to go through because of the interference fit in the cast iron stub axle. So after pounding them into place with an old socket, you have to ream them back out to size. This requires a special tool because both bushes have to be reamed in alignment - a little like line-boring, but in this case the tool has a step in it. The upper bush is smaller.

Anyway, Peter warned me that this was hard work, and he wasn't wrong. Without any mechanical way of applying downward force on it, it took about 2 hours, and has enhanced my pectoral region somewhat. I hit upon the idea of putting one of the old bolts back into the stub axle, giving me two parallel faces on which to clamp it in the vice. Without this trick it would have been a properly impossible task I think. In the below picture the reamer has finally passed all the way through. It is important to turn the reamer in the forward direction only so that you do not blunt it. Below, you can see the reamed bronze piling up in the oil on the rag underneath: 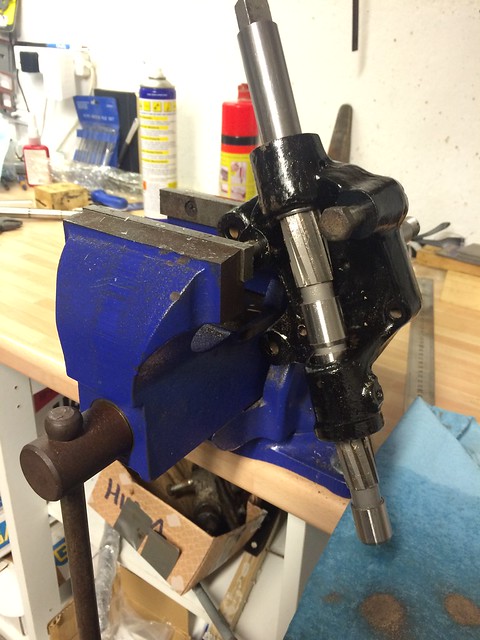 Here's a top-down view - this is the square end you have to turn while applying as much weight to it as possible (and getting blisters in the process): 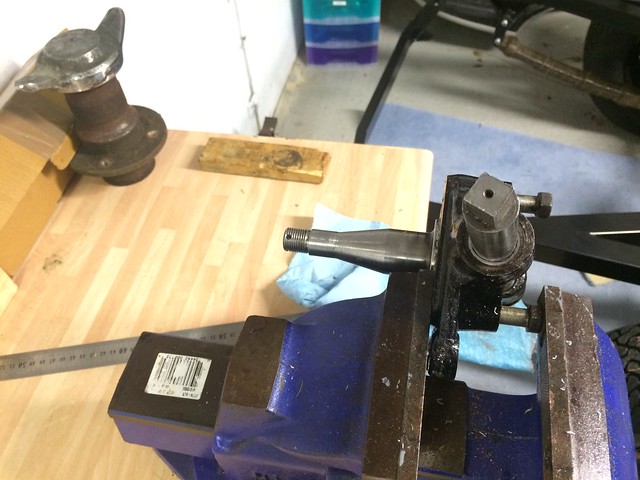 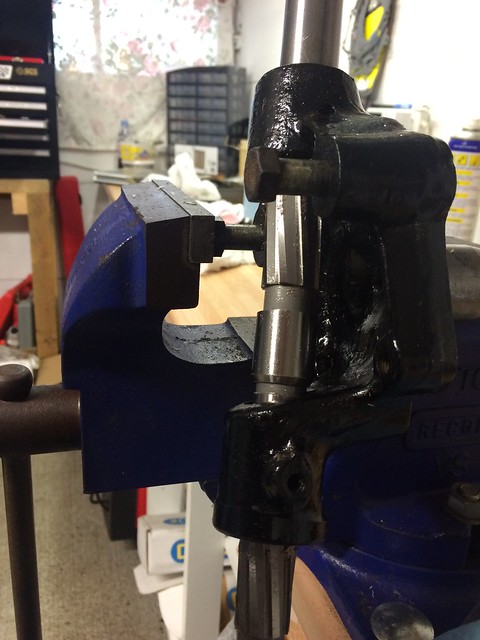 I turned the reamer with a good quality adjustable spanner, and put a rag on the top so that I could apply downward pressure on it without getting too many blisters. I don't know what could be used to turn the square bit on the top of the reamer - if I had some more steel in the workshop I might have made a tool for it.

Here's a picture of it all on the bench, lying next to the new king-pin. 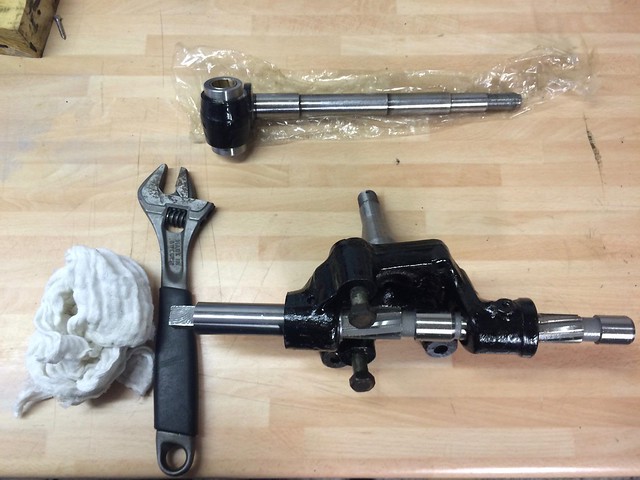 I had hoped to get away with replacing just the pins, since the reamer was so expensive. But if someone offers to loan you one, it seemed churlish not to do the job properly at this stage. But blimey it's hard work.

Photo looking down the reamed bush - note the lubrication channels in the bush. Grease is injected via a nipple on the outside of the housing, and you need to make sure the hole in the bush lines up with the hole in the housing as you drive it in. You can see a groove running round the middle of the inside of the bush and a diagonal slanted groove crossing it - these are the channels where the grease goes so that it gets round the bearing faces of the king-pin. 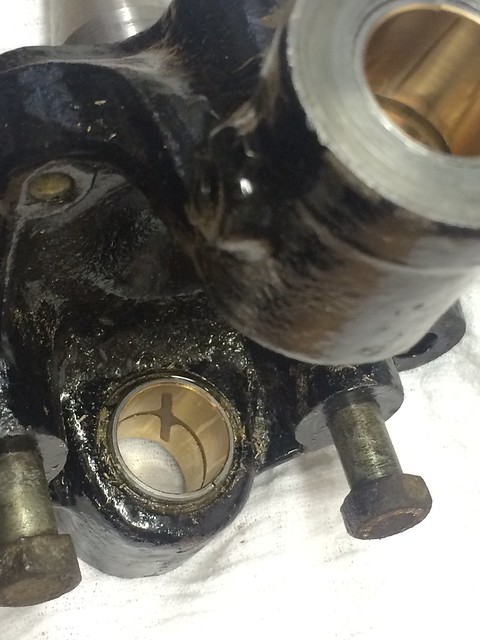 Not shown in the above picture is the fact that the diagonal grease channel on the top bush goes right the way to the top, but does not extend to the bottom. This is so that grease will go upwards and find its way into the top trunnion and the thrust washer arrangement there. Don't get the top bush upside down, otherwise this important area will go unlubricated.

Final picture showing that the grease inlet port in the housing (where the grease nipple screws in) is in alignment with the hole in the bush: 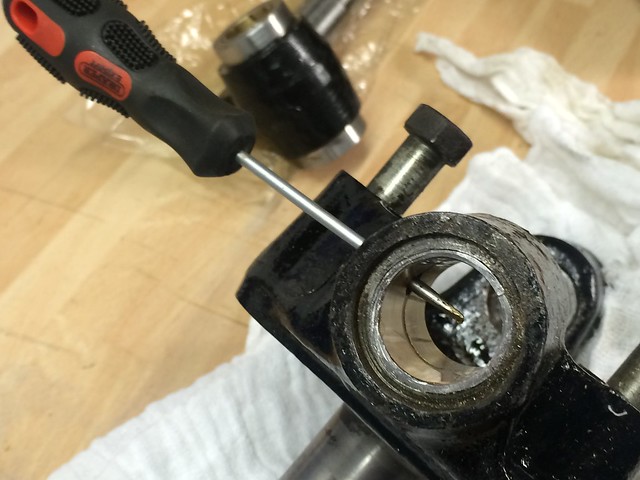 On balance, while this has been an instructive exercise, I think I would probably just pay the money for new/refurbed stub-axles.
Top

Here's a video of me dismantling an MGB stub axle - I'll post some more in the future to show the re-assembly:

The other videos I've done are on the Wiki at the bottom of this page: http://wiki.the289register.com/doku.php?id=videos
Top

I think I got the 1000 miles greasing interval from the Haynes manual, but yes - it's pretty frequent. Basically you're pushing grease in to force out dirt and water on a frequent basis. I guess all the old stuff will just squidge out of the seals at the bottom and from underneath the trunnion at the top.

No need to dismantle it fortunately. Just keep pumping the grease into your nipples!
Top
Post Reply
209 posts