A few people have asked me for more information on how I went about changing the bodywork on the front of the Classic replicas Viper that I'd bought, to resemble a 289 Cobra, here's a brief outline of how it was done. The idea was to use the body styles of 39PH and 644 CGT that I liked, and to make a Le Mans style replica based on those two cars. The Viper was bought as a bit of a stop gap whilst I finish off renovating my house (amongst other things). I don't want to start the scratch build until I can solely concentrate on it, without distraction from other major family projects. The Viper however, is a work in progress that I can just fit in between everything else, plus it means I've a car that I can have a bit of fun with in the meantime. It's been through SVA and had a load of nice parts fitted. Most importantly though, it was, what I considered to be a bargain price.

The car as bought 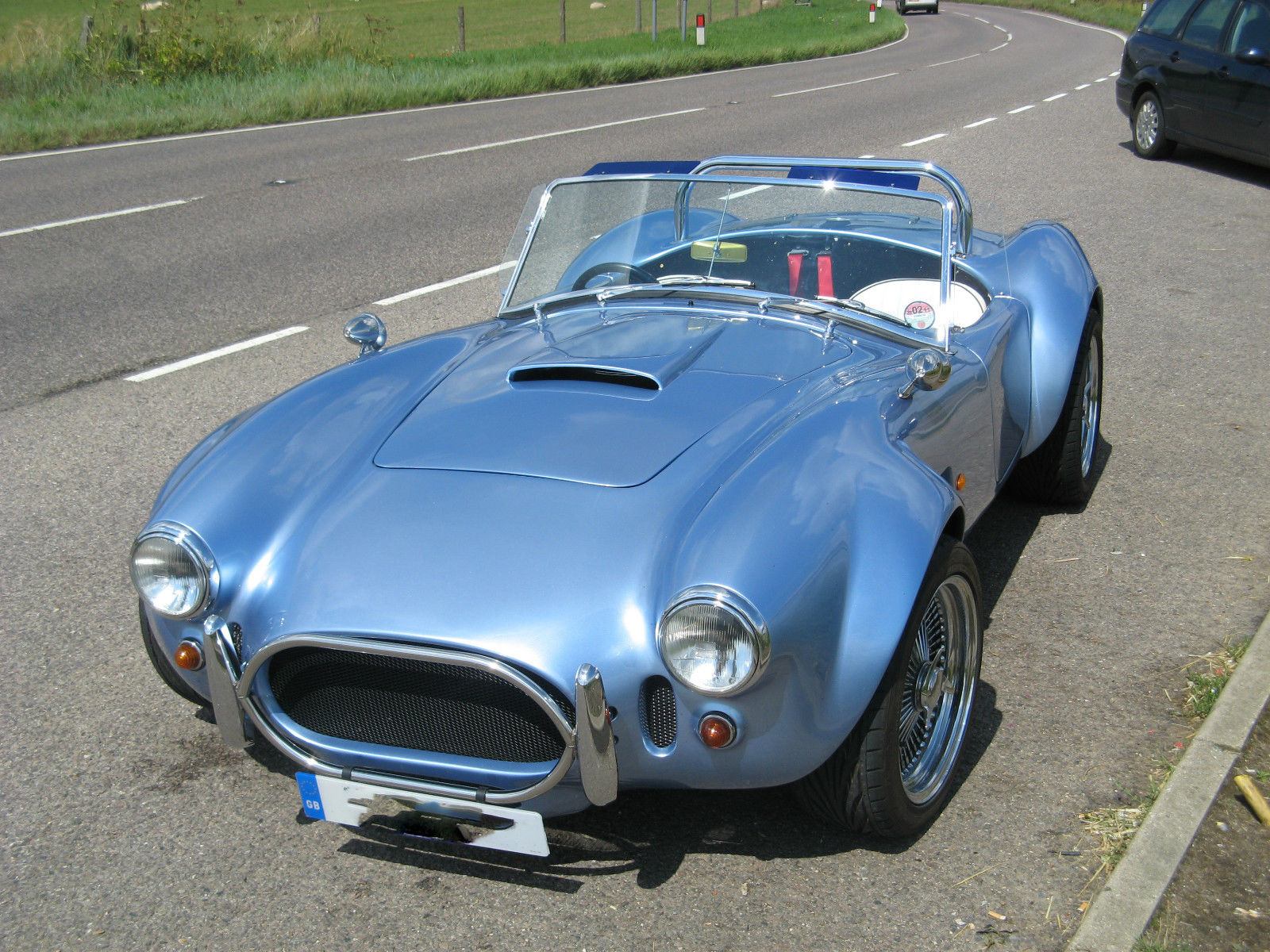 As the front is now. 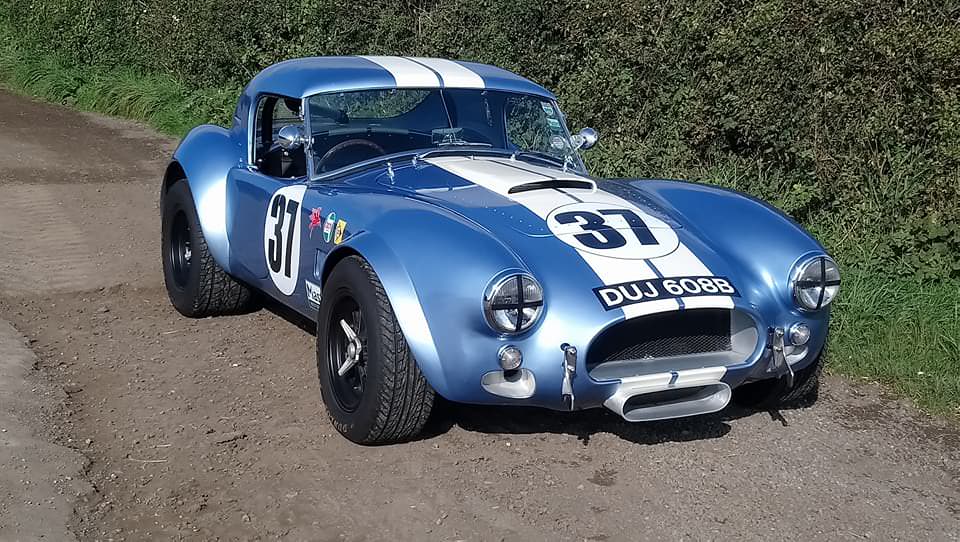 When you first look at a Viper it all appears to be visually correct, but as soon as put a tape measure to it you enter into a world of hurt. The o/s headlight is 30mm nearer to the centre of the car than the n/s. Not only that but it's also 20mm lower than the n/s too. The profile of the front of the wings ie the crown is also dramatically different. If you sight the car down the drivers side, or put a straight edge along the door, you'll find that the wing actually tapers inwards at the arch by, yep you guessed it 30mm. The grille opening isn't the right shape either & isn't elliptical, the opening is larger on the n/s than the offside, plus it's actually canted higher on the n/s too. It would seem that the car that it was moulded off could well have been a 289, that has been made to look like a 427. Whatever car it was moulded off, I can only assume it has had damage & been repaired incorrectly, hence throwing out the dimensions. Incidentally, the rear 1/4's aren't the same as a 427 either & the rear decklid has been raised so that the profile off the bootlid is wrong.

in saying that, the Viper has an immensely strong chassis and if anything, is over engineered, which I feel is a good thing. The body is a good thick layup and is of a good high quality. it drives and handles really well, unlike some of the others out there, so all in all I'm pleased with it

I was originally going to narrow the front end suspension, steering etc, but that woulod have been major work, but as I'm a panel beater sprayer by profession, I decided to modify the body/arches instead, which would allow me to correct some, of the dimension discrepancies. I say some, as to rectify them all, would take a huge amount of work, for something that 99% of people would never notice anyway. I must admit I've wondered how many Viper owners, or others that are into Cobras have ever noticed how far out they really are.As I said at the beginning, it's not until you put a tape to it that it all became glaringly obvious.

To rectify the huge front arches, I bought two outer front wing skins from ebay. I cut off the Viper wings where necessary & bonded on the new wings, whilst squaring things up a bit. I then cut off the arches from the new wings, cut off the arches from the old wings & fitted them in the right place. It was a case then of fiberglassing it all up & giving it a skim of filler to finish it all off. Here's a couple of photos of it in the process of being done.

At this point it's all just screwed into place

I then cut the grille aperture & pulled it & clamped it to where it should be. This could then be fibreglassed and repaired later once happy with the way everything looked.

My god Nige,
I didn't realise you had to go through that much pain, to get to where you are now, hats off to you mate.
I suppose ignorance is bliss if you are a Viper owner

Having been in the restoration business you've mended worse and jobs like this were mentally straight forward, but still requiring a lot of graft and skill to bring it altogether.
I bought a Lotus Élan+2 that had new front end put on, the bonnet was an inch lower than than front panel, took ages to sort it out, along with the pop up headlights. Fibreglass is cheap to repair, but takes patience to get right, if you over stress it will craze later on.
My preference is to use use P40 instead of filler whenever possible and expoxy primer to seal everything.
Thanks for taking the time to show the reconstruction, it's now a very unique Cobra.

Hi Martin, thanks for the compliments, strangely enough, most people can't get their heads around the amount of work I've done to this car, or why I'm doing it. I must admit, sometimes I wonder why I'm even doing it too, but I'm fortunate enough to be in the position that I can do the work and it's only really costing me my time and material costs. I know how I want it to look and so far it's on target

I also use a fibreglass filler, but tend to use U Pol SMC which is a carbon fibre and fibreglass mix, which sands down really well without pin holes. I tend to use this over all of the fibreglass repairs, followed by some body filler to finish things off.


Fibreglass time.......Once happy with the general fit of it all, metal straps were screwed across the joints to hold all of the sectioned pieces in the correct place. The wings were then unscrewed & the gaps where it had been cut were covered with duct tape on the outside and then fibreglassed on the inside.

Once fully cured the tape was removed as were the steel supporting straps.

The wings were then trial fitted back onto the car to check that all was well and that nothing had moved.

The fibreglass on the body that the new panels would "sit" on were then ground down, with an extra couple of inches extra to ensure that the new fibreglass wasn't bonding onto the original finish on the wings. This makes the original wings thinner and will allow an almost smooth transition between old and new once finished, without there being a "step" in the repairs. Two layers of 450 gramme mat was then applied to the body where the new panels were going to go. The new wings were then screwed to the bodywork whilst the mat is wet, thereby making a fibreglass "sandwich" between the old and new panels. This will form a strong mechanical bond between the two panels, essentially making them become one piece. Once that had cured, the 'glass was sanded down until it was slightly lower than the correct profile. Two layers were then glassed over the top of the joins, so that the new panels are now sandwiched in between layers of 'glass. This also fills in the holes that were drilled for the screws.

In this picture I had already bonded on the original arch from the Viper as a basis to form the new arch. You can also see the cuts that were made (behind the grips) to enable the grille aperture to be reshaped.

Trialing the shape of the new arches, the lines on the arch are there for datum points and measurements to ensure the profile is equal side to side

The arches were then reshaped to how I wanted them to look.Once happy with the shape and curvatures, I bent some 6mm bar to the shape of the arches & bonded it in place. (not visible in the photo's as I got a bit engrossed doing this and I forgot to photograph it) I've also smoothed out the underside of the arch so that if you were to put your hands under there it would feel smooth ie no fibreglass & it has a wired edge as per an original.

Once all of the fiberglassing was done, it's was a case of sanding the whole lot down to the correct profile, then coating it with UPol SMC filler. That was then sanded down and a light coat of body filler was applied to get the surface smooth.

This is all a great credit to you, I am astounded. Mind you this comes from someone whose biggest glassfibre achievement was putting a patch on a boat.

Thanks David, but there really is no magic in doing stuff like this

I didn't want the side light plinths or the vents to the side of the grille opening, so I cut them out & re-fibreglassed it back smooth. In this first picture you can see where I had to cut the grille aperture & modify it to make it elliptical. The lower part of the grille was moulded from the lower front valance panel that I'd made for the "Insanity" car. Here it's loosely held in place with some body clamps.

An oil cooler vent was made in aluminium, using the steel one that I'd previously made for "Insanity" as a template

The fibreglass was then sanded smooth and a coat of SMC filler applied, sanded down and then followed by a skim of bodyfiller. I then positioned the L539 sidelights where they needed to be, drilled the holes and offered them up in place. I made a template of the shape of the brake duct vents and used it as a mask to spray some satin black paint onto the bodywork to make sure I was happy with the positioning of them. Far easier to do this than to cut them out only to find you don't like the look of their position.


This is trial fitting the new 289 style front valance/grille opening, You can see the wired edge of the arch in this picture, along with the smoothed off underside of the arch. Just noticed there's a pic of 39PH on the bonnet for reference purposes

The front valance was then bonded into place and the holes for the brake cooling vents were cut out. I fabricated some aluminium inserts which will take some 2" ducting for the brakes

The black stuff you can see in this pic is the SMC fibreglass/kevlar filler I spoke of previously. The fibreglass had been sanded down and the SMC was then used to get the final shape.

The front valance is pretty much about done in this picture, just a a little bit of fettling was needed here & there. I made some aluminium panels to fit inside the grille opening to finish it off & trial fitted the pieces along with the new indicator lights to see how it all looked. It all fits quite nicely, so once it was all painted it was riveted together 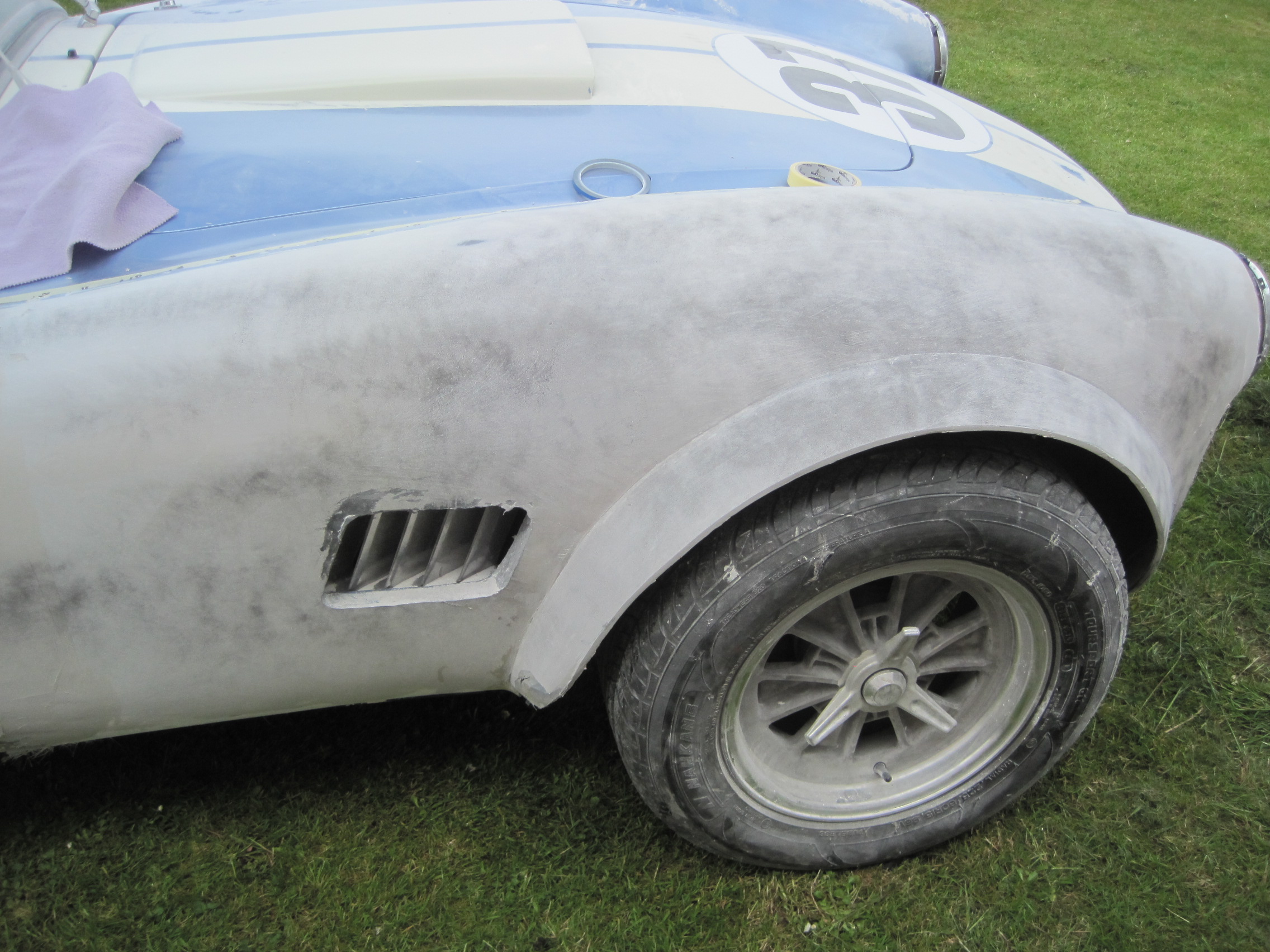 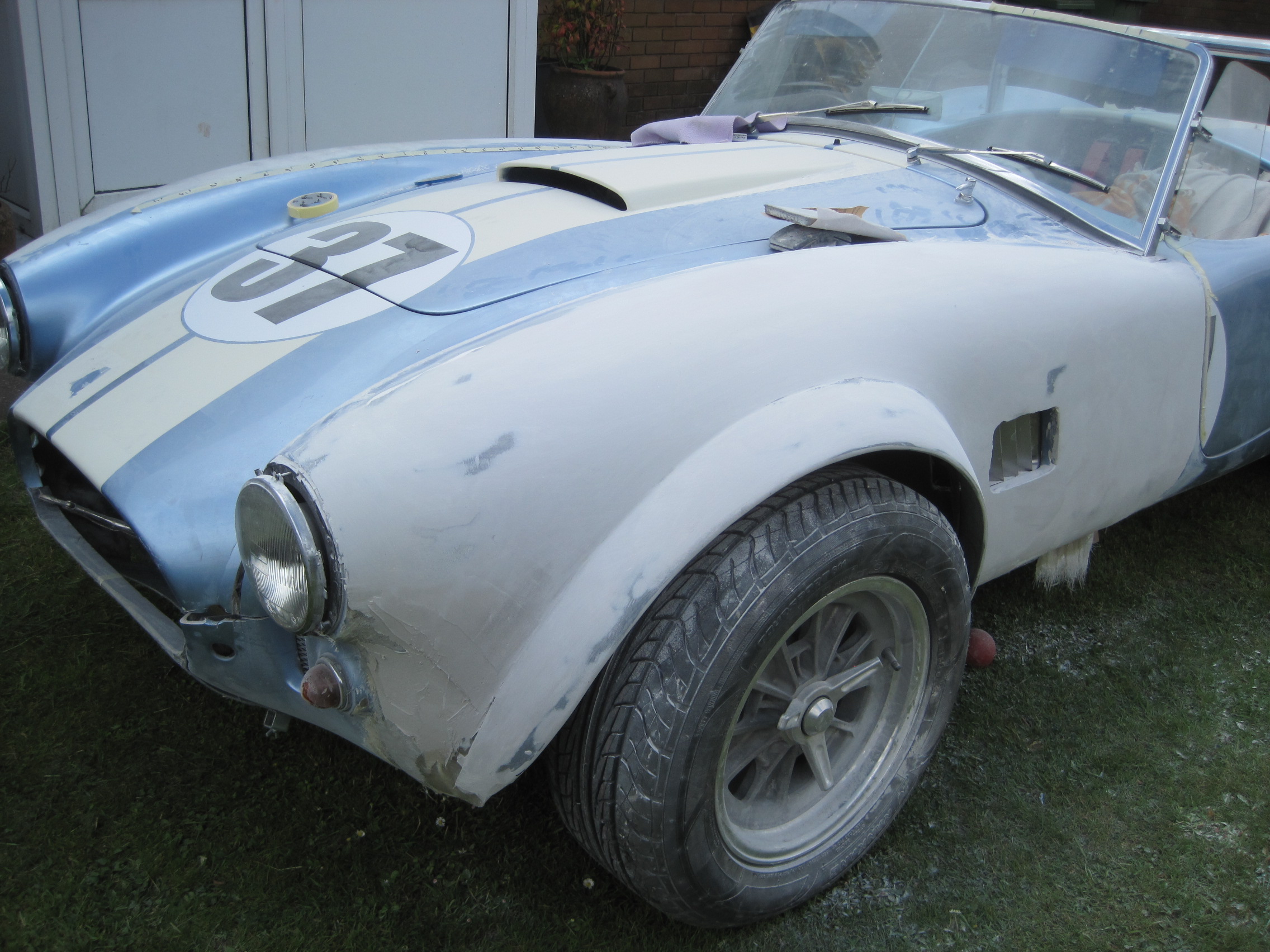 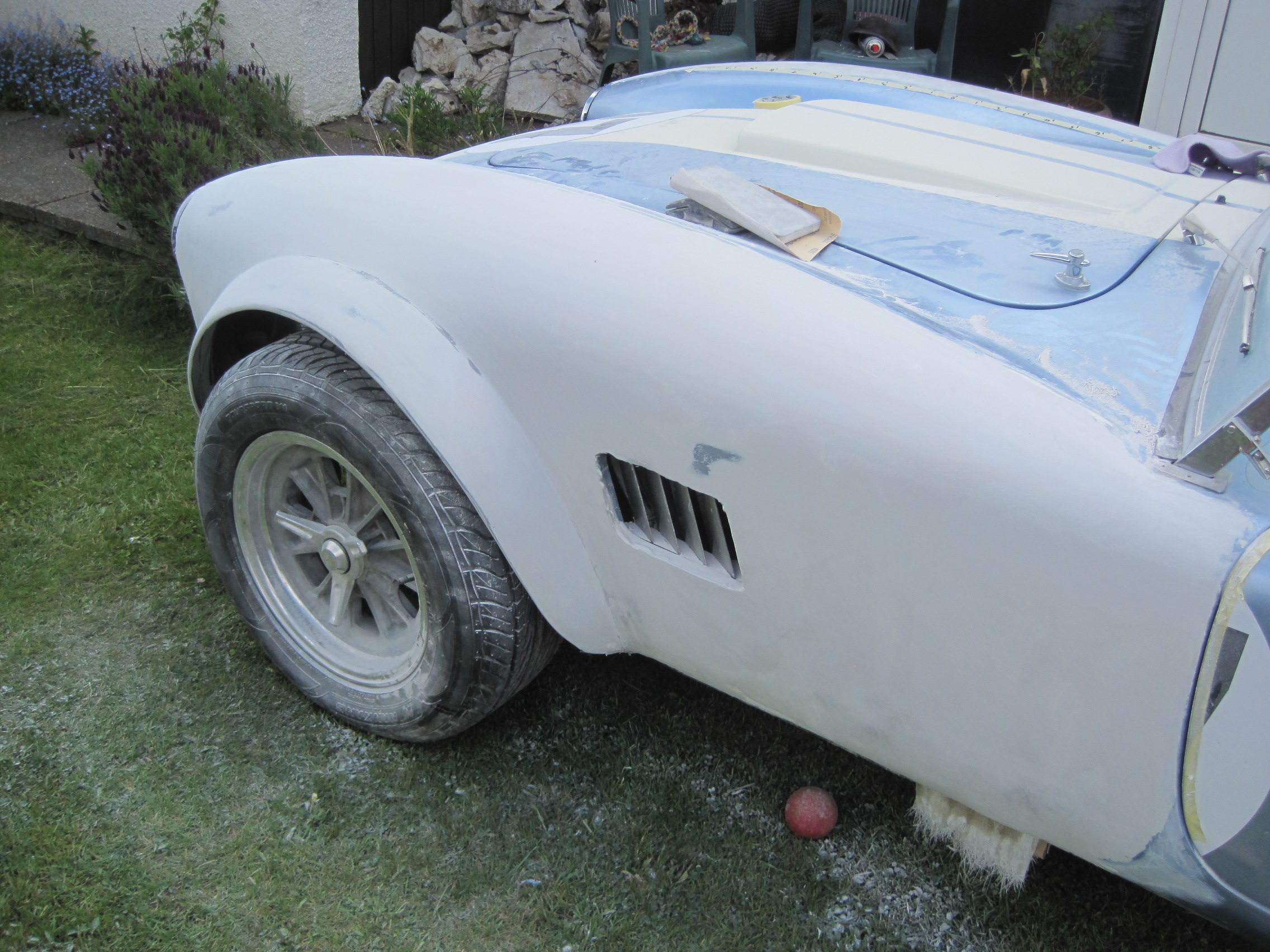 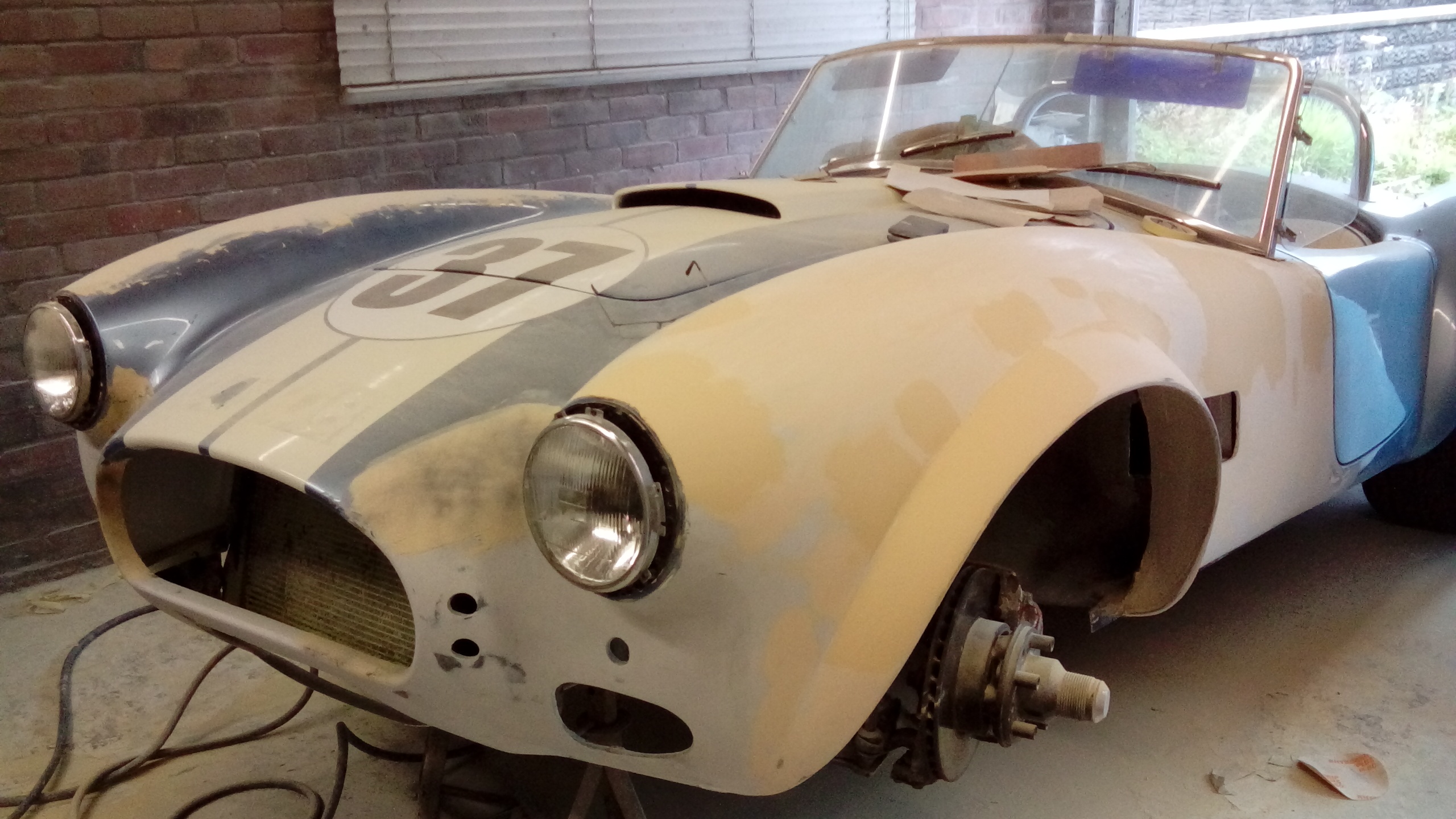 Primer over the repairs 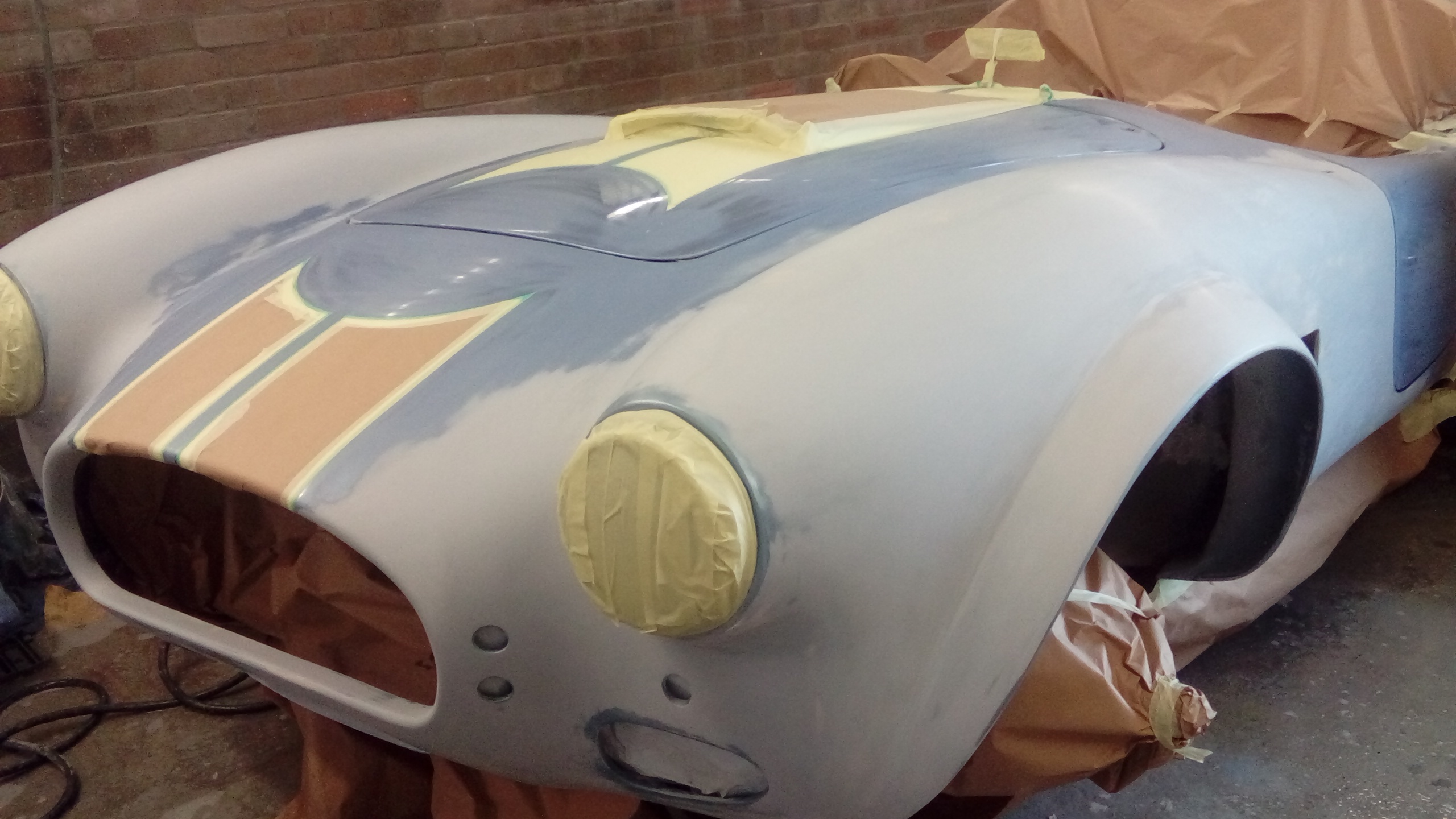 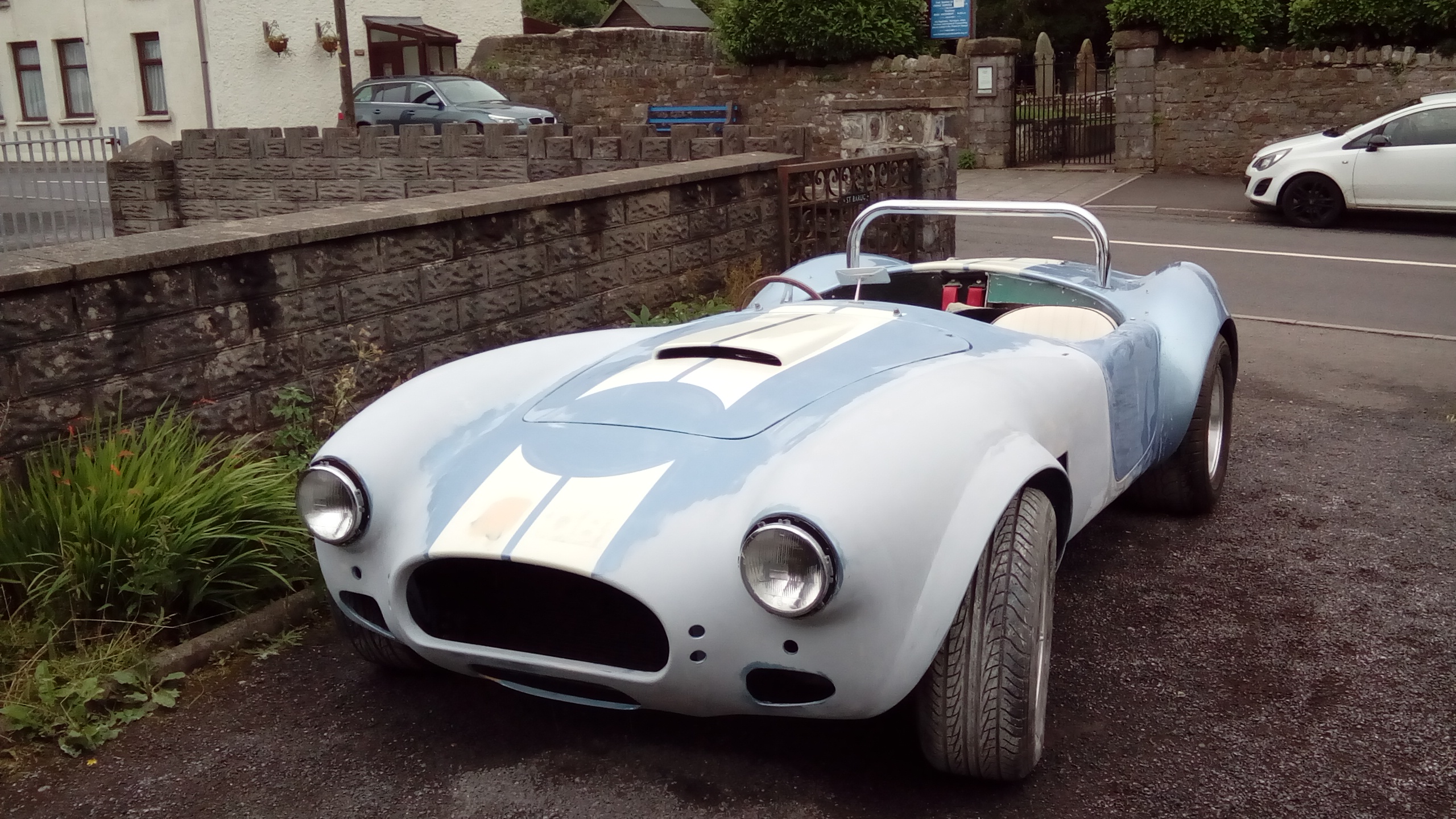 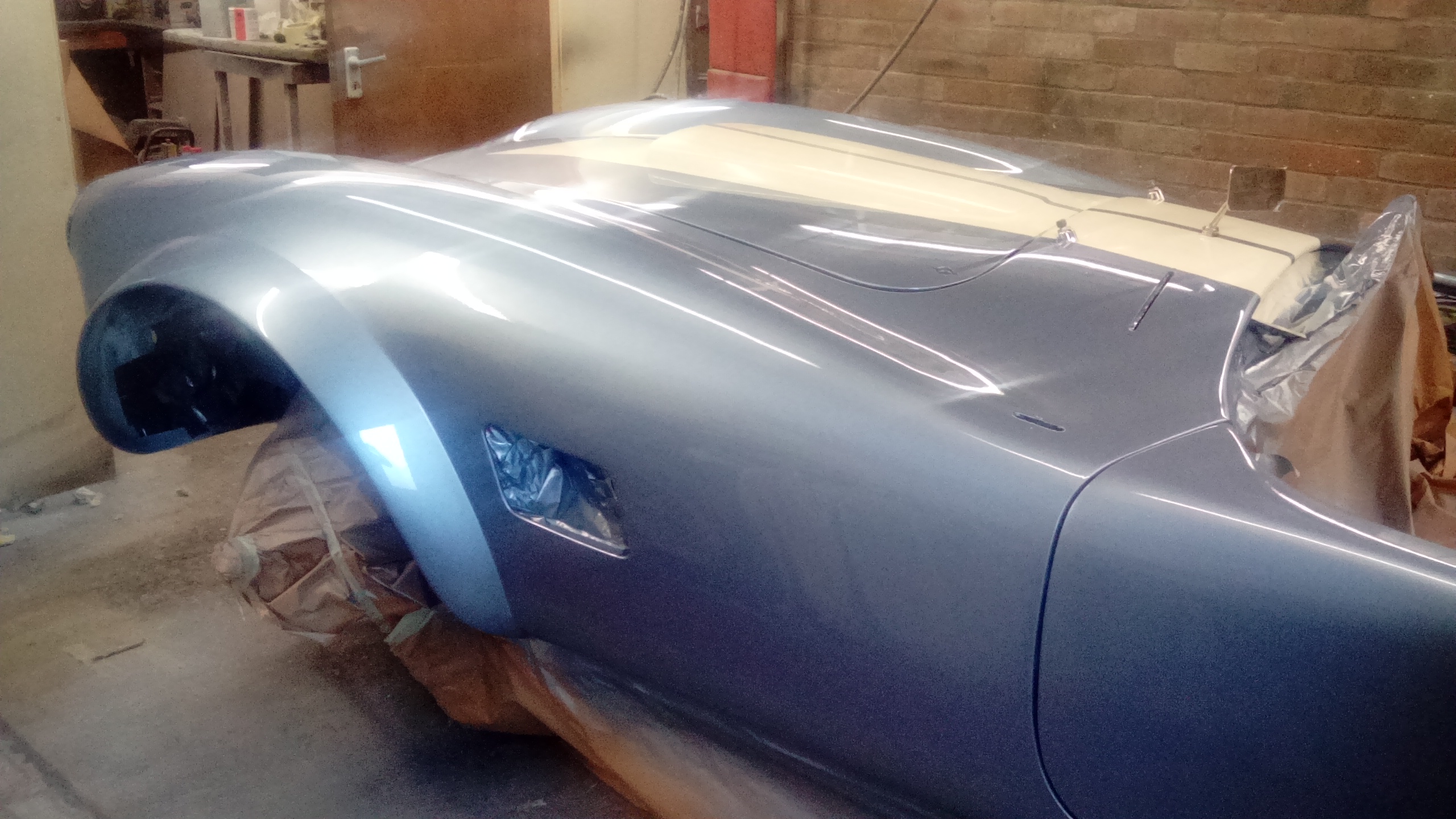 First time outside in blue 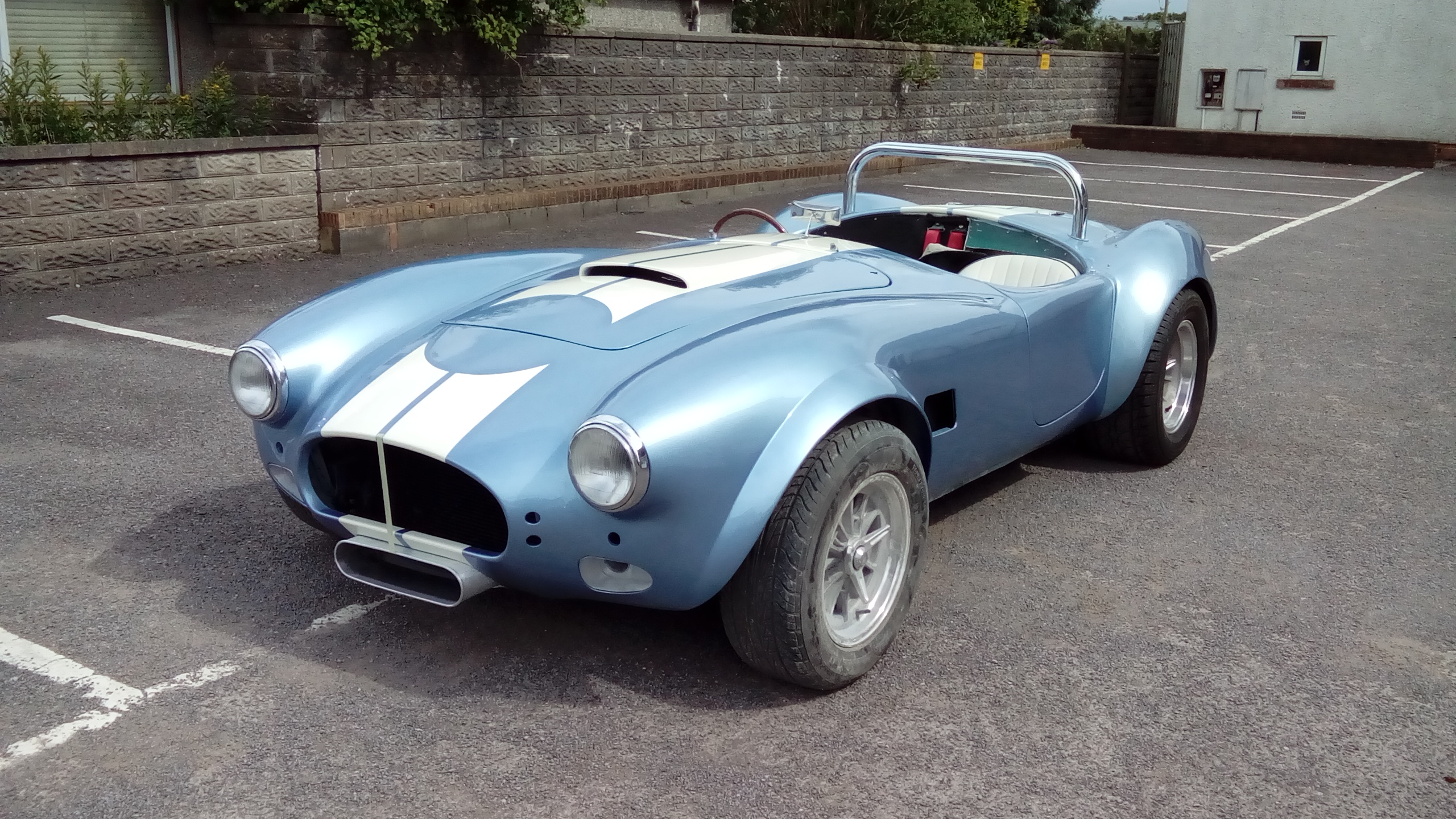 Some shots of it outside 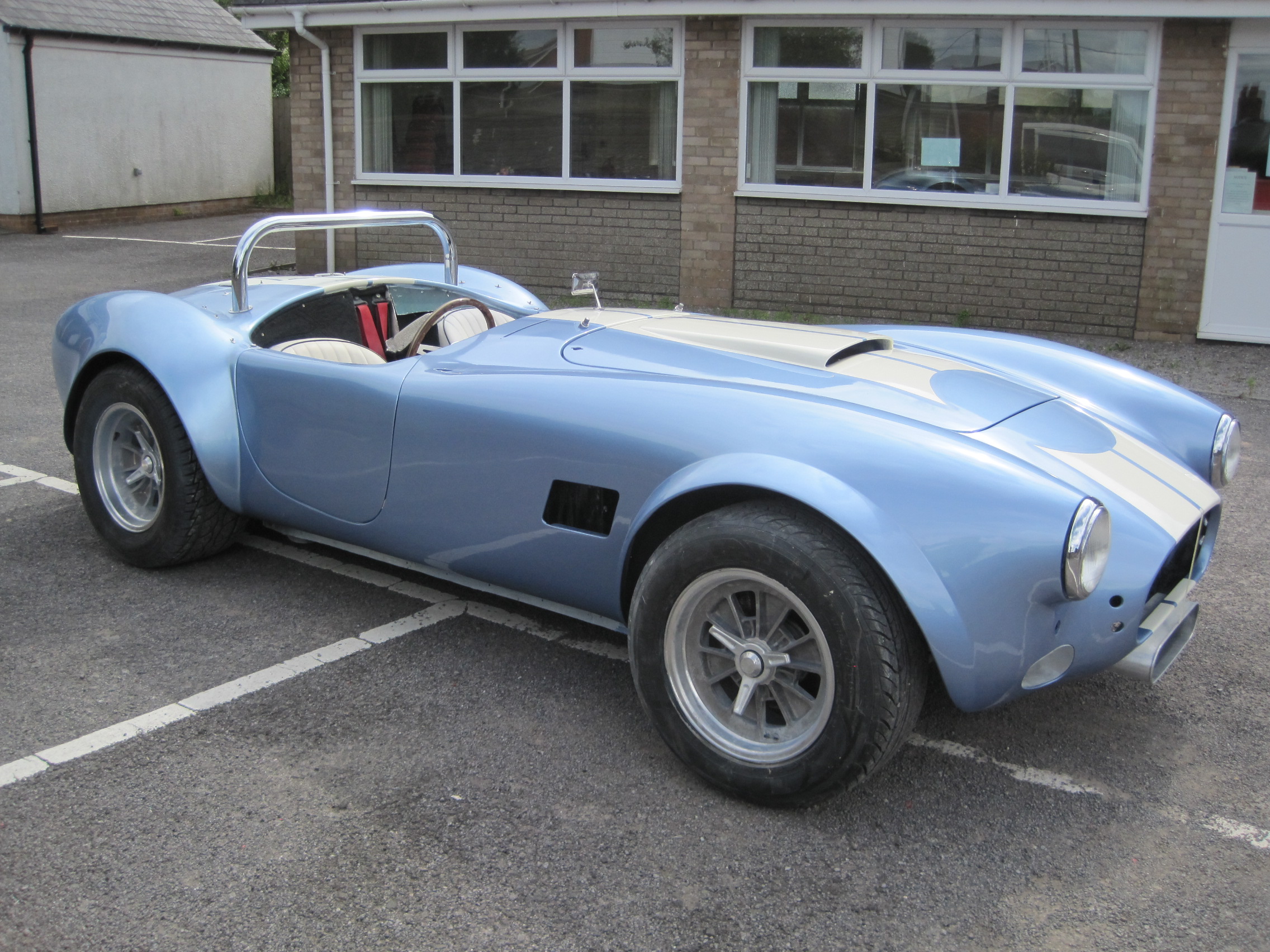 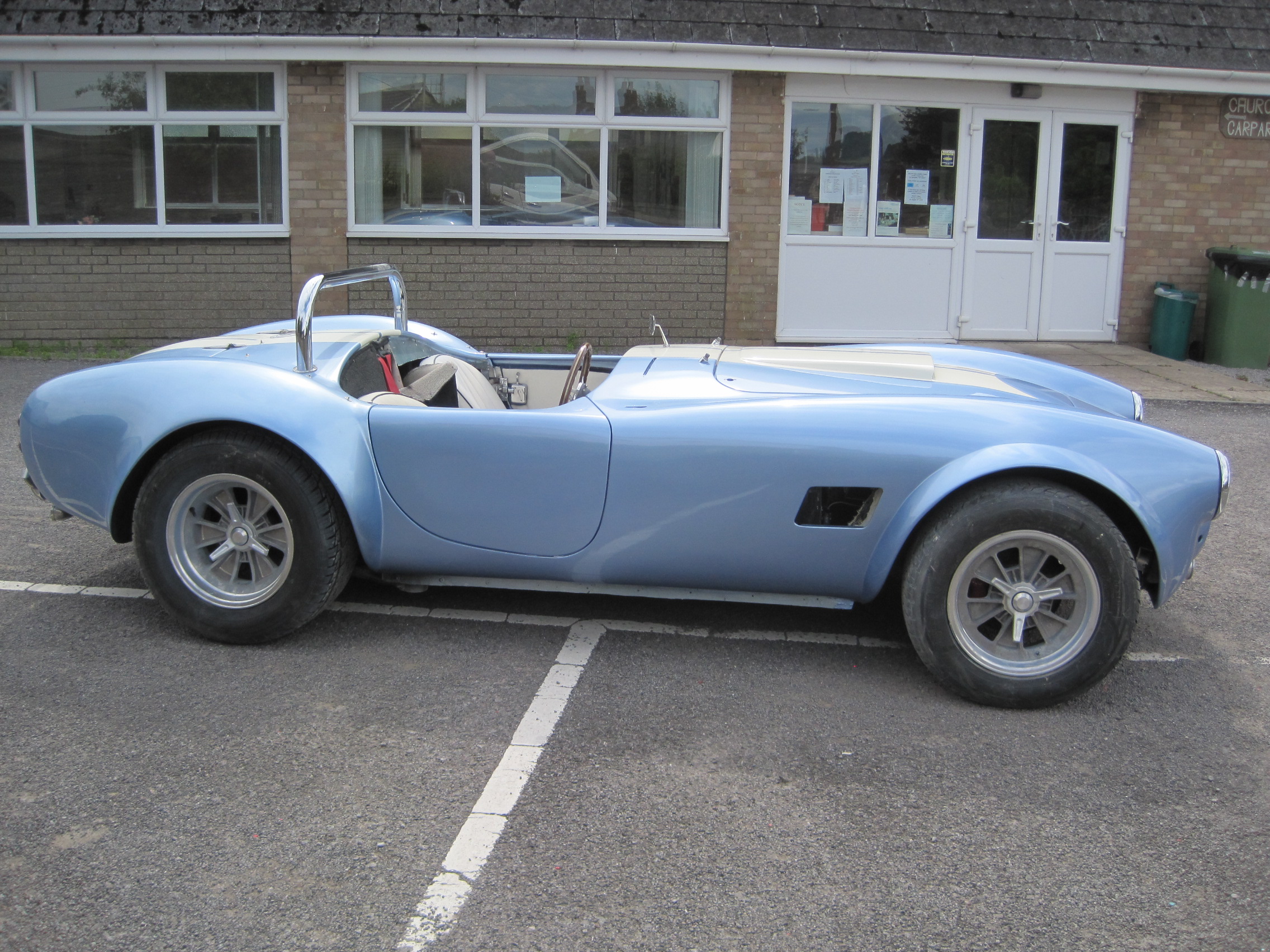